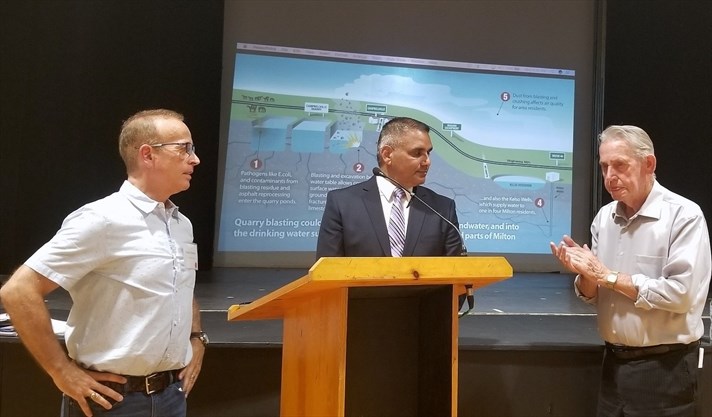 The fight to stop the proposed quarry in Campbellville continues with Milton MPP Parm Gill formally requesting “an immediate” environmental assessment of the site.

The local MPP first made the announcement at a community meeting Wednesday night, July 24, at Hitherfield School in Campbellville, which was attended by about a hundred residents to hear the latest on the Reid Road Reservoir Quarry application.

“This project poses serious threats to the quality of life, health and general well-being of the residents in my riding in Milton,” Gill read the letter addressed to the minister of Environment, Conservation and Parks.

He said community rejection is focused on potential negative impacts to water quality and quantity — and damage to the natural environment, as well as physical hazards such as dust, fly rock, increased traffic, air and noise emissions, diminished property values and inadequate public consultation.

It was in early August of last year that James Dick Construction Limited (JDCL) filed an application to the Ministry of Natural Resources and Forestry (MNRF) for a licence to operate a pit and quarry and an asphalt reprocessing plant.

The company plans to extract 990,000 tonnes of aggregate annually by underwater blasting.

Mike Balkwill, a campaign organizer with ACTION Milton, a community organization that has been leading the charge against the proposed quarry for the past year, said that an environmental assessment requires JDCL to meet “a higher level of technical requirements.”

It will also be “less expensive” for the group's legal battle as the financial burden of conducting peer-reviewed studies will be taken by the provincial government.

Additionally, it will “make the process political,” he said rather than seeing it referred solely to the Local Planning Appeal Tribunal (LPAT), where “one person who has no accountability to anybody” has the final say. There have been more than 1,000 objection letters from residents.

He said the fact that the concerns of residents are shared by all four levels of government sends a clear message.

And responding to a question from a community member, Krantz said he couldn’t be sure of the quarry's benefits to the municipality.

“If there is a benefit there, I don’t know what it is,” he said, making an illustration that if the town gets $100,000 they will probably have to spend $200,000 on fixing damaged roads caused by the operation.

Meanwhile, as part of the region’s continued efforts to halt the proposed quarry, Coun. Kristina Tesser Derksen said that the town has completed the initial findings of the Joint Agency Review Team, stating the technical comments will be finalized and forwarded to the MNRF within the next few weeks.

Although there’s a lot of political goodwill expressed at the meeting, Balkwill said that it needs further support from citizens to “propel it forward.” Among other things, he encourages them to sign a petition supporting the environmental assessment.

Similarly, Coun. Colin Best urges everyone to keep getting involved.

“If we don’t stop this now, it’s going to be there for the rest of time,” he said.

Facebook Twitter
Please check your e-mail for a link to activate your account.