MPP plans to announce measure to stop proposal in near future 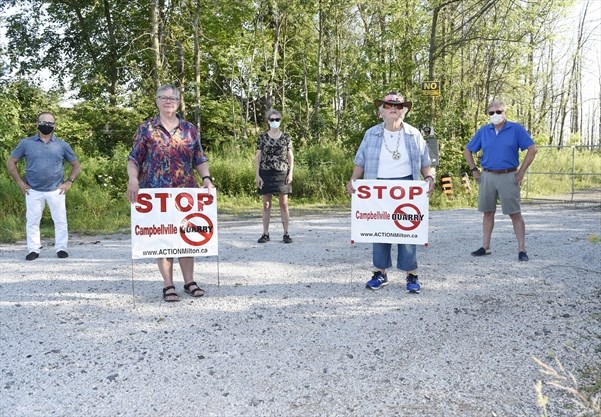 The community gained a powerful voice in their opposition against the proposed Campbellville quarry after Premier Doug Ford said during a recent visit to Milton that his government “will make sure it doesn’t happen.”

But George Minakakis, chair of ACTION Milton, a local group that has been spearheading the efforts against the proposal, said the fight isn’t over yet.

“The community’s persistent attention and advocacy on this issue has brought us to this point,” said Minakakis at the Aug. 6 online community meeting. “We will need to maintain positive pressure until there’s a decision … that stops the Campbellville quarry.”

At the meeting, MPP Parm Gill, in a recorded statement, said he understood the frustration of residents, including those who’d like an update on the status of the environmental assessment requested for the site last summer.

“We're making progress on that end. And sometimes I know it's frustrating and things don't quite move at the speed that we’d like it to move,” he said, as the government continues to grapple with the impact of COVID-19.

Reiterating that the project “is not in the best interest of the community,” Gill said he’d make an announcement in the “very near future” that will hopefully put an end to the proposal.

Mayor Gord Krantz said the town will continue to work together with the region, the community group, and the province as the “biggest key player” to ensure that they will achieve that goal.

Feeling “good” that it would ultimately happen, Krantz also floated the idea of eventually turning the former site of a gravel and sand pit into a conservation area.

This was echoed by Coun. Colin Best.

“I think that’s the best solution,” he said.

It was about two years ago that James Dick Construction Limited (JDCL) applied to the Ministry of Natural Resources and Forestry for a licence to operate a pit and quarry and an asphalt reprocessing plant at 9210 Twiss Rd. with a plan to extract a maximum of 990,000 tonnes of aggregate per year by underwater blasting.

According to the ministry, the application is still in the review stage.

While the Aggregate Resources Act consultation period normally has to be completed within two years, the province has suspended the timelines in light of the pandemic.

As for the ongoing joint agency review team (JART) process, an undertaking by the Town of Milton, Halton Region, and Conservation Halton to review studies submitted by JDCL, Coun. Kristina Tesser Derksen said the public, including experts from ACTION Milton, would be able to submit input and questions to the team to be considered in the due process.

Greg Sweetnam, vice-president of JDCL, said in a previous interview that the company is working to settle every single issue raised by JART.

When asked about Ford’s recent remarks, Sweetnam said in an email response that the company doesn’t have any comment.

As for ACTION Milton, the group, while appreciating the consistent opposition by the mayor and other officials on the proposed Reid Road Reservoir quarry, is calling for the town to withdraw from the JART process.

“It is a waste of time and money to continue that process given the obvious intention of the provincial government to stop the Campbellville quarry,” said Minakakis in a media release on behalf of the group.

Minakakis also said that details of how the province plans to stop the quarry should be shared “as soon as possible.”

STORY BEHIND THE STORY: Despite support from the premier and all levels of governments to stop the proposed Campbellville quarry, there are still lingering concerns over the details and timing of the measure.